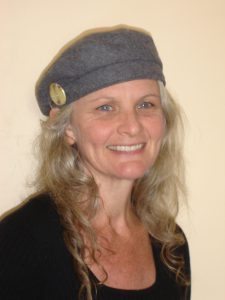 After marrying and staying home to raise my daughters, I began my arts degree and practice as a mature aged student with interest in visual art, creative writing, costume and prop design. It came from a love of making things with my hands but with the guidance received at university awakening me to a greater understanding of what art is and learning to make art about the things that mattered to me, it was like a stopper had been removed and it came pouring out of me.

I learned to be thrifty and re-purpose things as a child, we were not that well-off and with six children in our family, visits to op shops and tip shops helped shaped my creativity and my work has developed from this background. l learned a love for the ‘discarded’ and a way of seeing the possibilities in things rather than just what they were. I have developed a great dislike of ‘waste’ especially in these times of excess stuff piling up in affluent countries while others starve.

I love aged, pre-loved items with their story already etched into them, and giving those pieces a new purpose, a new chapter in their story is a great joy to me. I work almost entirely with unwanted, discarded materials, recycling them, hoping to create unique things of beauty or intrigue that see these items and materials becoming wanted and loved once more.

My art work is usually conceptual and speaks of being human in this world, my spiritual journey, the natural world and the ‘interconnectedness’ of all that is. I align with the ideas of Deep Ecology and feel we live the wrong way on the planet and that it is through an understanding of this ‘connectedness’ that the change we need in the world can come about. So, I guess, I try to keep finding unique and new ways of speaking about this through my art. When I finish a body of work and have shown it and settle again looking to what is next, I get an overwhelming, exciting feeling of the expanse of infinite possibility waiting to be brought into being. I want to be a vehicle through which this happens. Making art is essential to me.

I am a stilt walker and a member of our local women’s community circus, Circus WoW, and am also interested in Wearable Art. These two areas allow me to develop my love of costume design. I work in a similar way in this field, re-purposing second hand garments and objects to create costumes. Community is important to me, so I have actually spent 20 years doing voluntary work running community art events, circus gigs and an annual breast cancer fundraiser.

I am a founding member of IAVA, the Illawarra Association of the Visual Arts, supporting and promoting contemporary arts practice. I am also a member of RPAA, Red Point Artists Association at Port Kembla, helping to revitalise a depressed area through art and culture.